You spend less on food than your grandparents did

While the costs of many things, from education to housing, have marched steadily upwards over the past decades, the cost of food has not. Data from the U.S. Department of Agriculture’s Economic Research Service shows that spending on food proportional to our income has dropped since the 1960s (see figure below). 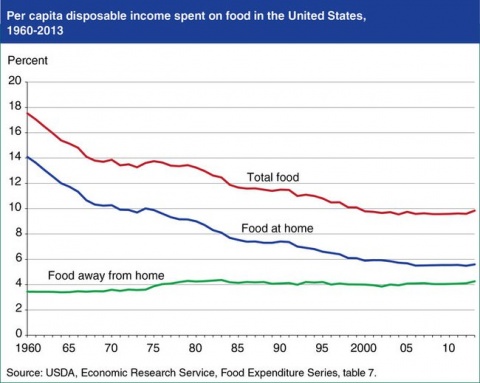 The percentage of your income that goes towards food also changes with your income bracket. Households with higher incomes tend to spend a higher dollar total on food, although this represents a smaller proportion of overall expenses. Lower income households spend fewer dollars, which represents a higher share of total spending.

Yet it’s time to reevaluate if cheap food is an absolute good. As the price of food has come down, it has also become more industrialized, more processed, and more packaged. It’s become increasingly difficult to see how a single-serving protein bar wrapped in plastic is connected to animals and plants.

While pursuing a goal of cheap food, governments and companies contribute to a food system that uses resources at an unprecedented rate, abuses animals, and pollutes the environment—from fertilizers running off the fields to food packaging filling up landfills and the ocean. And there’s mounting scientific research to suggest that eating highly processed food contributes to a number of diseases and shorter lives.

Often, calls for a more sustainable food system are met with the argument that such food is unaffordable. Yet the U.S. has been so successful at making food cheap that we spend less on food than virtually any other country. According to the USDA Economic Research Service, 6.7 percent of consumer expenditure went towards food in 2013. Compare that to 9.3 percent in the United Kingdom, 13 percent in South Korea, 15.7 percent in Brazil, 26.1 percent in China, and 29.6 percent in India. If there’s any country that can afford to consider spending more on food to protect the environment, it’s the United States.

Ensuring everyone has access to affordable food is unquestionably an important goal, but the type of food matters. It matters both in the short term to our personal health, and in the long term to our environmental quality.