Indian officials ordered to take up broom on day off

India's four million federal government staff and millions of schoolchildren have taken up brooms and dusters to spearhead a drive to clean up the country.

The nationwide campaign was launched to coincide with the birthday of independence leader Mahatma Gandhi. The day is traditionally celebrated as a national holiday, but this year civil servants and pupils in government-run schools are not having time off. Instead they are busy sweeping away the dirt and dust in their offices and schools - and even cleaning the toilets.

The cleanliness drive is being led by Prime Minister Narendra Modi - on Thursday morning he was seen with a broom in hand, sweeping clean a part of a street in Valmiki Nagar, the largest sweeper colony in the capital, Delhi, while launching the Swachh Bharat Abhiyan (Clean India Campaign). What better way to pay tribute to the Mahatma than by launching a plan to "Clean India" on his birthday, Mr Modi asked, and vowed that by 2019 - when India celebrates the 150th anniversary of Gandhi's birth - "we will have a country where there is not even a speck of dirt in our village, city, street, area, school, temple and hospital". "After so many years of independence, do we still want to live in filthiness? Can't we resolve this much?" he asked. Gandhi, revered in the country as the father of the nation, was known to be finicky about cleanliness and hygiene.

To ensure the success of Thursday's event, the government began a major outreach programme days in advance. Advertisements have been placed in major newspapers for the past few days, urging people to "come forward in large numbers" to participate, and in the run-up to the formal launch of the campaign, photographs of broom-wielding bureaucrats and ministers have appeared in newspapers and on television news.

One report said that government offices were scrambling to get hold of brooms, dusters and dustbins - while some were buying a dozen, others were getting 70-80 depending on staff numbers. All staff were "requested" to come to work on Thursday by 9am and take a "cleanliness pledge", promising to devote at least 100 hours every year - or two hours a week - to cleaning up, then pick up the broom and start cleaning immediately. As proof, before and after photographs have to be submitted.

The main goal of the programme, the government says, is to end open defecation in the country - nearly half of India's 1.2 billion people have no access to toilets and Mr Modi has promised to build toilets in every school and provide every home with a toilet over the next five years. It's a massive challenge - will he be able to keep the promise?

Just building toilets is not going to change India, which is often described as being among the "dirtiest countries in the world". Indians are regularly berated for their general lack of hygiene. Parts of all the country's cities, including the capital Delhi, Mumbai and Calcutta have been turned into open urinals, and towns are choking under mounds of garbage. Many rivers, including the sacred Ganges, have been turned into sewers. Most Indians don't think twice before littering the streets and parks - and spit whenever and wherever they like.

So will Mr Modi's plan to get bureaucrats and school children to wield the broom help clean up India? Or, as some critics say, is it mere symbolism, just a "publicity stunt"? "I don't think it's a publicity stunt, I think Mr Modi genuinely means to clean up the country," says Umesh Anand, publisher of Civil Society magazine. Mr Anand believes that on Thursday, when millions of people watch the campaign unfold on TV, the message will at last get through - at least to some. "It's very important to have that kind of symbolism," he says.
by Geeta Pandey

END_OF_DOCUMENT_TOKEN_TO_BE_REPLACED 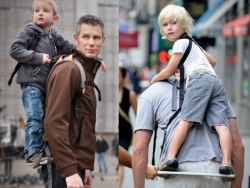